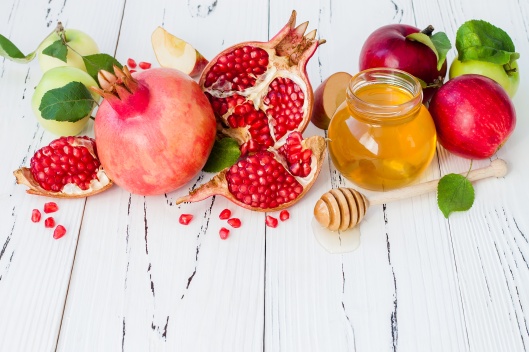 On Rosh Hashanah, the Day of Judgement, we appeal to God, the ultimate Judge, not to be too precise and exacting:

‘O faithful God, as You prepare to pass judgement,

Were you to press  the letter of the law in judgement,

Who would ever be found righteous before You and acquitted by such judgement?

(from the Musaf repetition)

While there’s a particular focus on the theme of Divine Judgement, God is not the only one we are scrutinised by. We are all subject to self-judgement. And while internal criticism can be healthy in moderation, in excess it can be detrimental to personal development. Untempered self-judgement, the little internal voice that says ‘you are not good enough’ can leave one feeling inadequate and incapable of achieving anything of value.

As we read the Rosh Hashanah liturgy this year, it may be useful to bear in mind, that if we are asking God to temper judgement with compassion, we should apply the same balance to ourselves. By softening our harsh internal criticism and practicing self acceptance we can go on to make the positive changes we need to enjoy a blessed year ahead.

The expressions Matan Torah and Kabbalat Torah suggest both a giving and a receiving of Torah. However, a riveting midrash (Tanhuma, Ekev 11) depicts a very different picture. It describes the tablets measuring six handbreadths in height and imagines God holding the upper third, Moshe holding the lower third with the middle third remaining in between the divine giver and the human recipient. Moshe then reached out and grasped the middle third, overpowering God as it were, drawing the tablets entirely into the human domain.

Inspired by this midrash, Rabbi Yerucham Leibovitz (1873-1936) who served as spiritual head of the famous Mir Yeshivah in Poland, suggests that the assumption that God simply gifts Torah to us is mistaken. We are meant to be more than passive recipients. We are encouraged to actively reach, if not overreach, for the Torah so that we can possess it.

I think this message is particularly relevant to women who too often assume a passive stance when it comes to Torah. They wait patiently to receive what others deem acceptable for them to receive, even when it is blatantly inadequate. The midrash indicates otherwise. When it comes to Torah there is no shame in demanding and grasping for more. On the contrary, it is through this hunger for greater access to Torah that Torah is truly honored.

This iconic image of Belda Lindenbaum z’’l holding the Torah aloft for hagba’ah encapsulates this message. Belda boldly staked her claim and pushed all barriers to bring Torah into women’s domain.

This Shavuot, let us all seize our share of Torah. 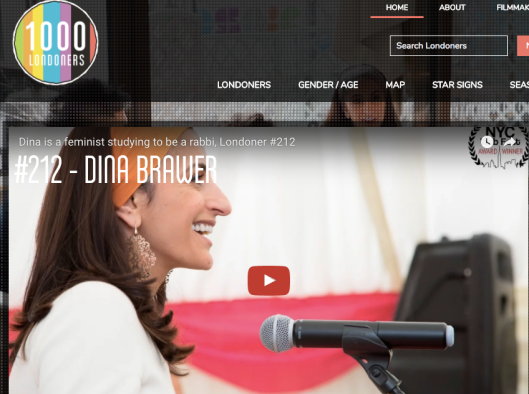 I have to take a deep breath before I can answer this question.

I was born in Milan and lived there until I left home aged 15 to continue my high school studies in Jerusalem. Upon graduating, I moved to the United States to continue my religious studies. Until that point I was from Italy.

Over eight years in the ‘melting pot’ of New York I came of age with work, marriage and children. Just as I began to put down roots and see myself as Italian-American, our family relocated to London.

All of a sudden, it became a little complicated.

I am from Italy.

But you sound American?

Yes I have been living in New York.

But if I was back in New York, I’d have to explain I was Italian but living in London.

Then came a point when I would visit Italy and my italian sounded a little foreign.

You speak italian really well. Where are you from?

I am from Milan.

But you sound American?

I had envisaged our move to London to be temporary. But ten years on, I had been living in London longer than I had ever lived in New York.

I did not feel British.

My husband and children all acquired British citizenship, I remained Italian, but finally acquired a pair of wellies.

I am a Londoner!

Just as I marked two decades of life in London, producer Rachel Wang got in touch requesting to interview me for a film feature called 1000 Londoners.

Rachel’s questions about the buildings, views and features of London that I most liked (and disliked!) made me realize, that while I don’t identify as British, I do identify as a Londoner.

I am comfortably at home in Milan, Jerusalem and New York, but London is my city.

I love its energy and architecture, its eclectic fashion, art and design scene.

I am grateful to Rachel for finding the Londoner in me by including in me as Londoner #212, which is the area code for New York! 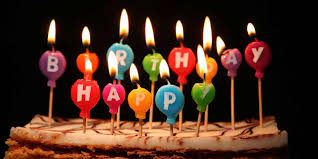 This year, the lunar and solar calendar are so aligned that my birthday falls on two consecutive days, the 9th May is followed by the 14th Iyar, turning it into a two-day ‘yom tov’.

To mark the occasion I am sharing two different insights on the contemporary relevance of Pesach Sheni.

Pesach Sheni: A Sense of Belonging looks at the significance of a second  opportunity to celebrate Pesach, while Exemption & Exclusion: Reflecting on Pesach Sheni  considers the cost of exemption from ritual, particularly in the context of women’s participation. 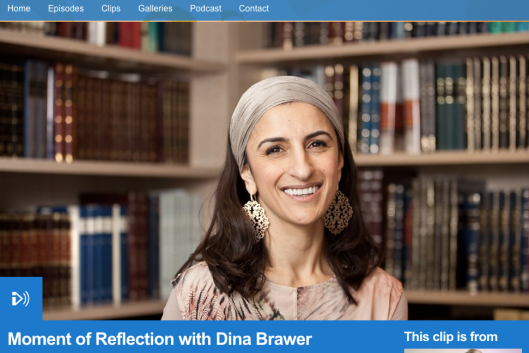 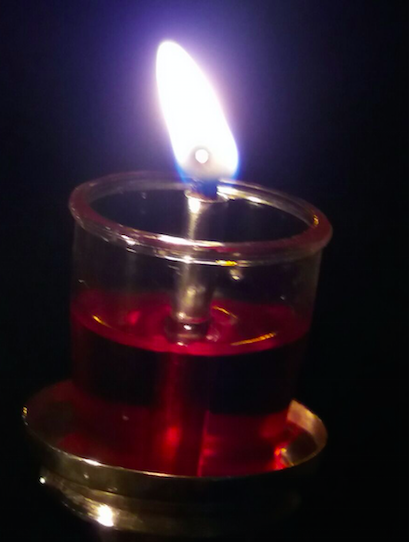 The Hanukkah lights are traditionally positioned at the window, so that they illuminate the darkness outside of our homes. This mitzvah speaks of  our obligation to brighten the lives of those outside the nucleus of our family and our own community.

The Talmud in tractate Shabbat explains that the mitzvah of Hanukkah can be fulfilled by one person lighting a candle on behalf of their household, but suggests that the optimal ‘mehadrin’ fulfilment is for each individual to kindle their own light. This obligation includes women, as Rabbi Yehoshua ben Levi states: ‘women are equally obligated, as they too were part of the miracle’. The formulation in the law of Hanukkah suggests that while we can get away with just one light per household, each individual is nonetheless encouraged to set aside some oil – a metaphor for the energy and passion that fuels our activity – required to kindle their personal Hanukkah light and illuminate the outside world.

This a lofty ideal, but in practice most of us, in particular women, experience an ongoing tension in trying to balance the energy we devote to the personal versus the public spheres.

TheTalmudic sage Rava addresses this tension saying: ‘’If one must choose between a house-light (for Shabbat) or a Hanukkah light, the house-light takes priority’. While Rava speaks of a case where one’s monetary budget doesn’t stretch to buying oil for both Shabbat and Hanukkah lights, we can apply his principle to situations where our time, energy and emotional resources are limited. In such cases our priority should be on the inner circle of our family.

But having clear priorities to our family may not be enough.

While work is permitted on Hanukkah, women have the custom to abstain from domestic chores while the lights burn. According to the mystics, abstaining from work enables us to absorb the holiness of the moment. This custom speaks of the importance of investing in spiritual self-care. Taking time to internalise the holiness of the Hanukkah lights is crucial if we are to illuminate external darkness.

Today is the 7th Day of Sukkot, our last chance to eat in the Sukkah. I was glad to have the opportunity to start the day reflecting on the meaning of beauty in Judaism in the context of Sukkot and Simhat Torah.
You can hear my discussion with Fern Britton as the faith guest on BBC Radio2 for ‘Faith in the World Week’ (listen from 38 minutes) including a ‘Moment of Reflection entitled ‘The Allure of Asymmetry’.

Our matriarchs make fleeting appearances in the Rosh Hashanah Torah and Haftarah reading through laughter, tears and prayer. Sarah laughs in reaction to God’s promise of a son late in life, Chanah prays fervently demanding of God the blessing of a child, and in Jeremiah’s prophetic vision, God offers words of comfort, responding to Rachel’s tears for her exiled children.

Yet their stories are not reported to us in full. We are left wondering about Sarah’s unmentioned tears over her many years of infertility and Chana’s laughter when rejoicing at her son’s birth. The untold part of the story presents an opportunity for us to try to step into our matriarchs’ shoes, to imagine their experiences and to empathise with their feelings. Perhaps this exercise can sensitise us to the unheard laughters, unshed tears and silent prayers within our own community.

May this New Year be blessed with an abundance of jubilant laughter, tears of joy and prayers of thanksgiving for all.

At the Seder we ask Mah Nishtanah – ‘what is different?’ but the same words also mean ‘what has changed?’

Following the Hasidic masters, who teach that Pesach is about achieving personal freedom from imposed limitations that inhibit our spiritual growth, I would like to suggest the following symbolic reading of Mah Nishtanah:

Why is this night different from all other nights?

What has changed in our lives on this night as we look back over the past year?

1. On all other nights we eat leavened products and matzah, and on this night only matzah.

Matzah represents humility, have we made space for others?

2.On all other nights we eat all vegetables, and on this night only bitter herbs.

What pain have we experienced and how have we grown from it?

3.On all other nights, we don’t dip our food even once, and on this night we dip twice.

What have we been immersed in and how has it shaped who we are tonight?

4.On all other nights we eat sitting or reclining, and on this night we only recline.

Have we taken time to recline, to be mindful of the special moments in our lives?

May we experience a reflective Seder that will inspire much spiritual growth and personal development in the coming year. 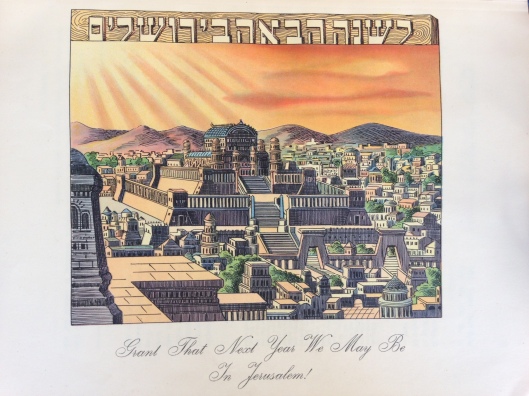 Last Wednesday night, instead of tuning into one of my long-distance classes at Yeshivat Maharat, I joined BBC Radio DJ and host Lauren Laverne for Late Night Woman’s Hour.

In a relaxed round table format we discussed what ‘purity’ means for women in the context of food, sex, religion and thought.  Emma Woolf, who chronicled her experience of anorexia in her book ‘An Apple a Day’ spoke about the current obsession for purity in food, Shirley Yanez explained why she took a vow of chastity after a near death experience, and pundit Helen Lewis addressed the subject in the context of political ideas.

My contribution – the religious perspective on purity – was substantially shaped by a recent series of ‘Pastoral Torah’ classes at Yeshivat Maharat that focused on embodied spirituality. Click on the image below to listen to the program: 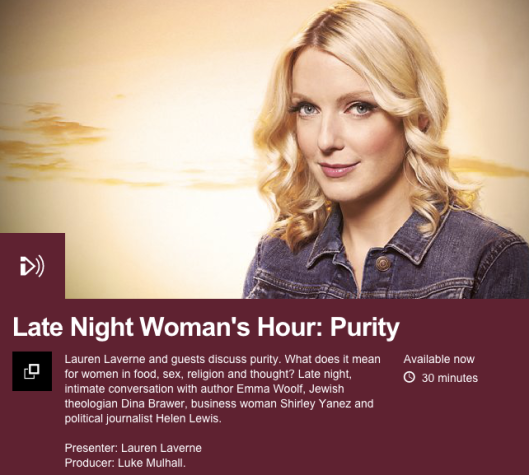